Brazilian Amazon Region.- Often referred to as "The green Inferno", the Amazon jungle is the largest tropical rainforest on Earth. Although the jungle's area is so big that reaches out to several different countries (Bolivia, Peru, Colombia, Venezuela, Guyana, French Guiana, Suriname, Panama, and Ecuador), most of its area is located within the Brazilian territory. The rainforest covers 7 out of the 27 Brazilian states, holding 39% of Brazil's 3,3 million square miles of area, which means that 1,28 million sq miles of the Amazon is located in Brazil alone.
The Amazon river is the world's largest river in volume of water, and the second in length. The Amazon starts at the top of the Peruvian section of the Andean Mountains, and flows into the Atlantic 4,007 miles away from there. The Amazonriver is sixty times greater than the Nile on its mouth, pouring 8 trillion gallons of water into the ocean every day, to have an idea of the river's hidrography, which by the way holds 20% of the world's fresh water!
The area covered by the eternal rainforest, consists of many different Ecosystems and the richest diversity in flora and fauna on our planet. The River generally called the Amazon has two major sources. The Rio Solimoes, coming down from the Andean mountains and the Peruvian border carrying with it sediments from the mountains which gives its water a brownish color.
From the north, the Rio Negro is winding its way through the dense forest. In the rainy season the river is flooding huge areas, in the process natural acids are extracted from the flooded woodlands, which makes the waters look very dark which gives the River its name Rio Negro, the black river.
The length of the Amazonriver varies between 6.400 and 7.025 km depending on which river is considered the main source. The river is pouring 8 trillion gallons of water into the ocean every day.
The Amazon basin covers an area of 8.512.000km² two fifth of the South American Continent. Two thirds of all river water on our planet flows in the River systems of the Amazon. Just a little south of Manaus the two rivers meet and due to the different consistence of their waters they are flowing side by side for miles only gradually mixing.
This natural phenomenon is rightly called " the meeting of the waters ".

Manaus.- Name of indigenous tribe which originally inhabited this particular area. Also meaning "Mother of God" in the native tongue. The city of Manaus - capital of the state of the Amazonas, with over 1.8 million inhabitants - is today the best equipped starting point for Eco-tourism in all of Brazil.
Manaus on the Gateway to the Rainforest:
At the turn of the last century Manaus was one of the richest cities in the world, architectural monuments from this period are witnesses of this great time.
The reason for this extreme wealth was the invention of Charles Goodyear, a process to transform the "Milk" of the Kautschuk tree into natural rubber. The so called Rubber Barons could afford all the luxury available in Europe and happily imported everything they could put their hands on, to the middle of nowhere. Famous architects constructed the "Theatro Amazonas", having as models the "Scala "in Milan and the Grand Opera of Paris, the "Palacio Rio Negro" and the "Mercado Municipal", a copy of the Les Halles in Paris. The floating port was imported from England.
With the end of the rubber boom came the end of the golden days and Manaus was forgotten for many years to come.
Only when the Government installed a free trade zone in Manaus the region came alive again and a new modern infrastructure was developed. Tourism is a main beneficiary of this process. In order to get a real feeling of the rain forest, one must leave the big city.

We will explore the rainforest and learn how people live in these tropical lowlands, close encounters with local tribes will allow us to have an insight into their way of life, traditions and cosmology.

Our native guides will teach the use of medicinal plants, the Amazon basin is the largest living laboratory with thousands of species, some not yet known to man - it is said that the cure to any disease can be found in the Amazon jungles - being the most complete natural medicine pharmacy on earth. You will earn a higher understanding of the importance of taking care of this important ecosystem.

Wildlife encounters are not guaranteed but it is possible to spot: Several species of monkeys roaming the canopy, caimans (Amazon alligators), river dolphins, manatees, river otters, a jaguar is spotted twice a year with much luck, paca, agouti, fish include the Arapima (up to 15 feet), piranha, electric eels, it is possible to see the famous Anaconda. Birdlife is abundant Araras, parakeets, macaws, nightjars, hoatzins, jacanas, crakes, ibis, herons, kingfishers and hundreds of unique species of insects and butterflies can be seen. 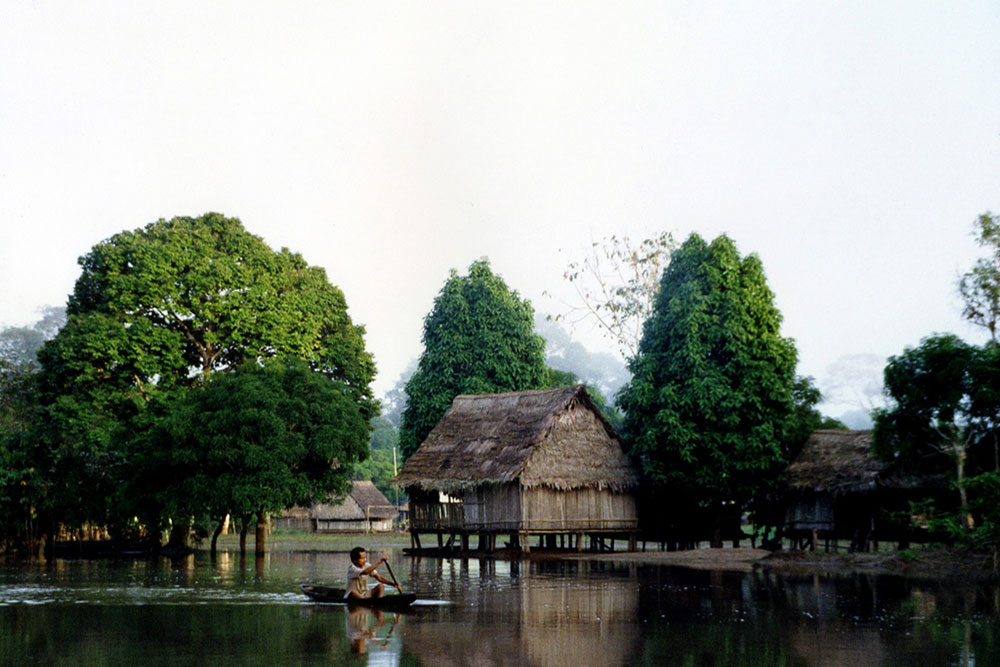 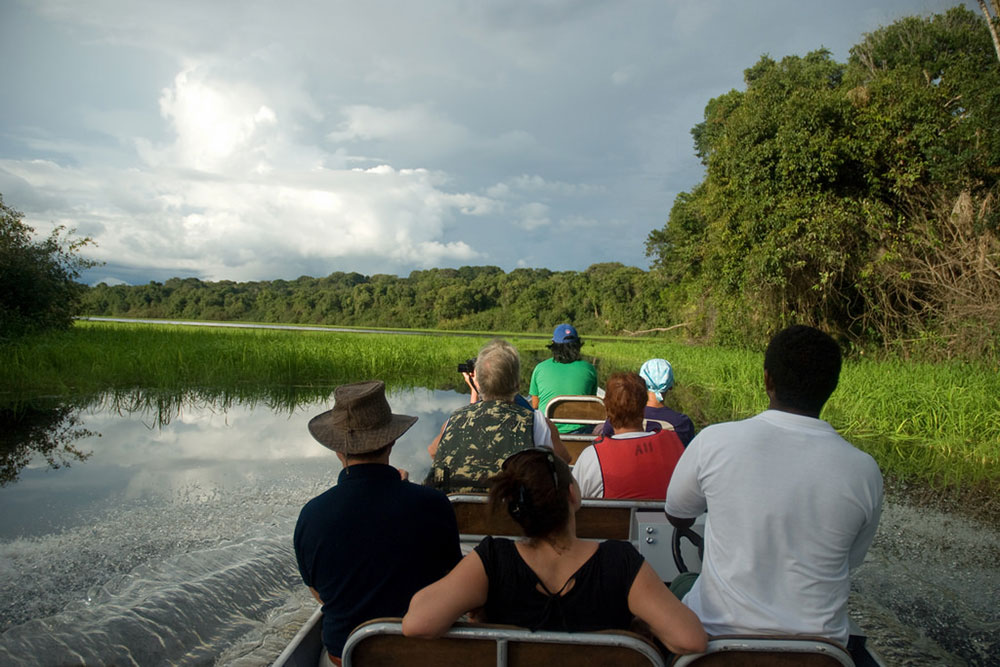 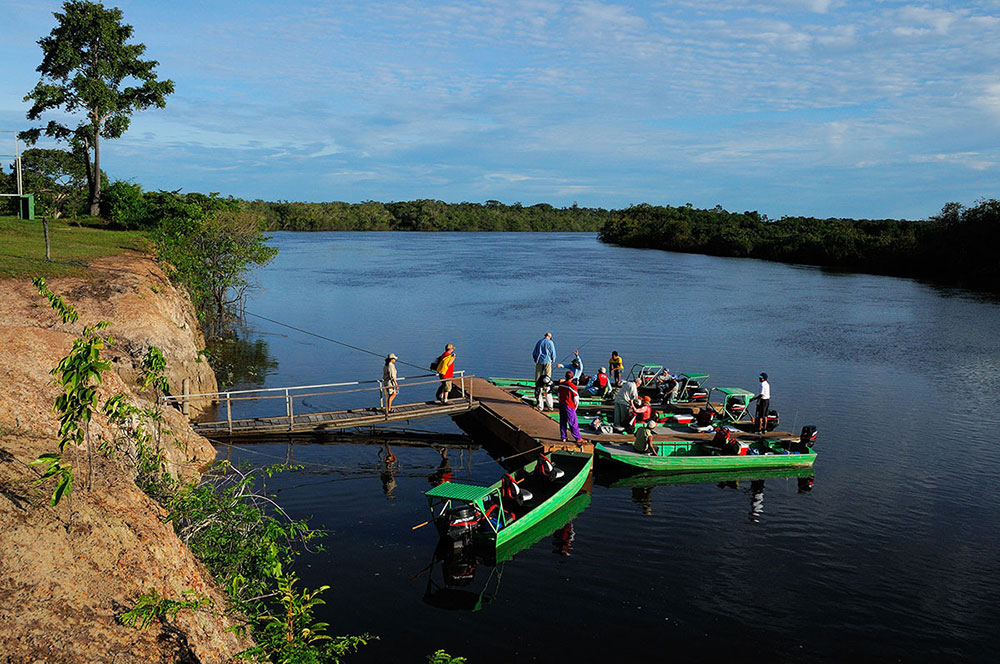 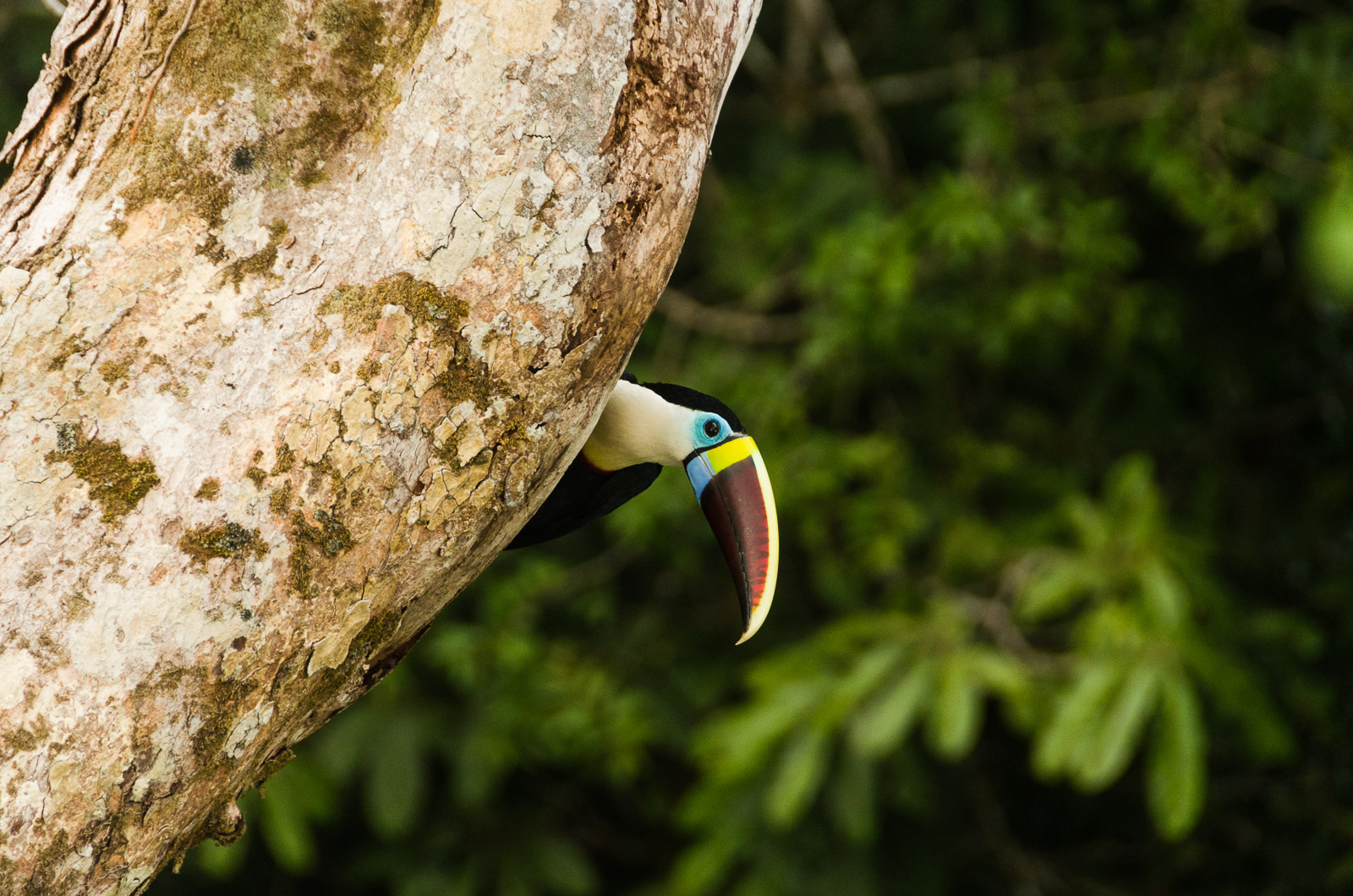 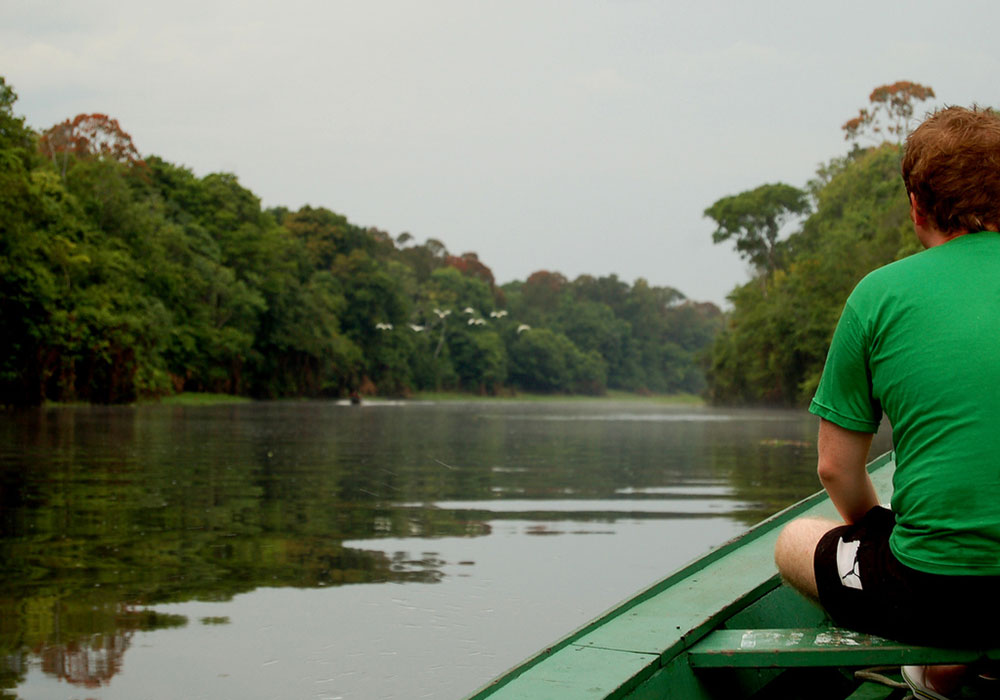 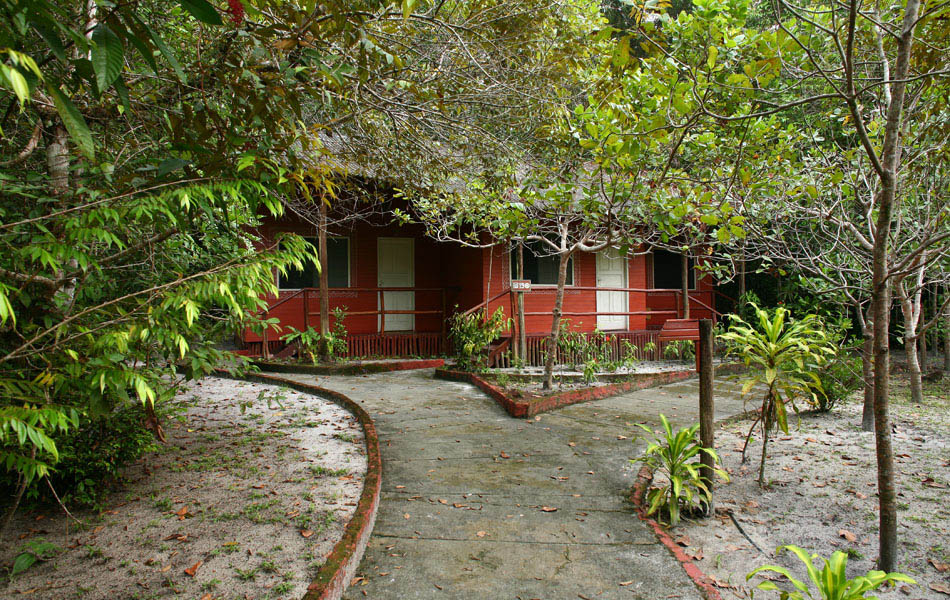 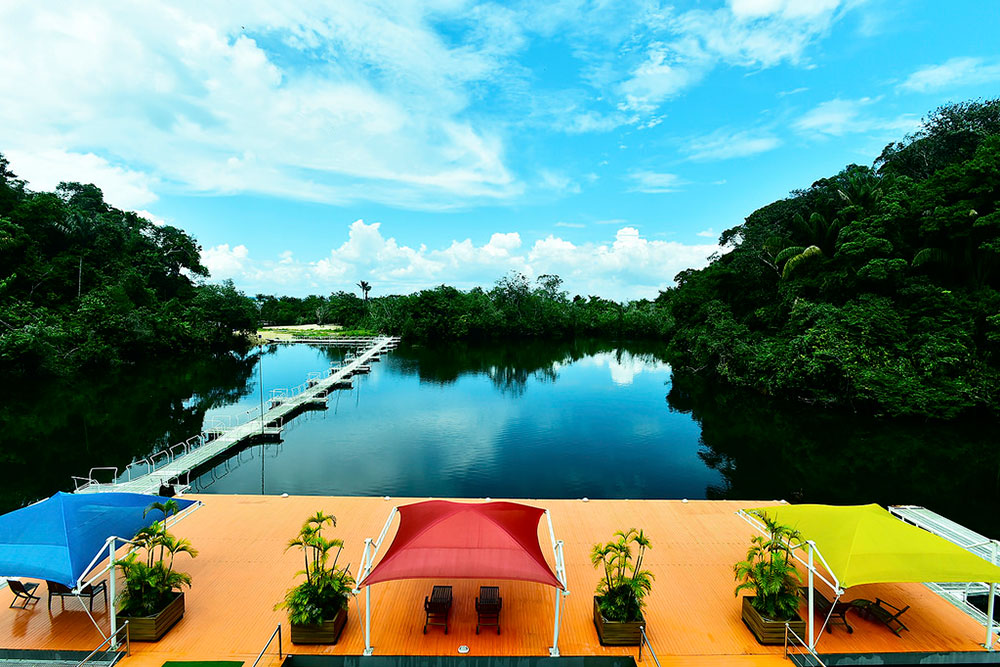 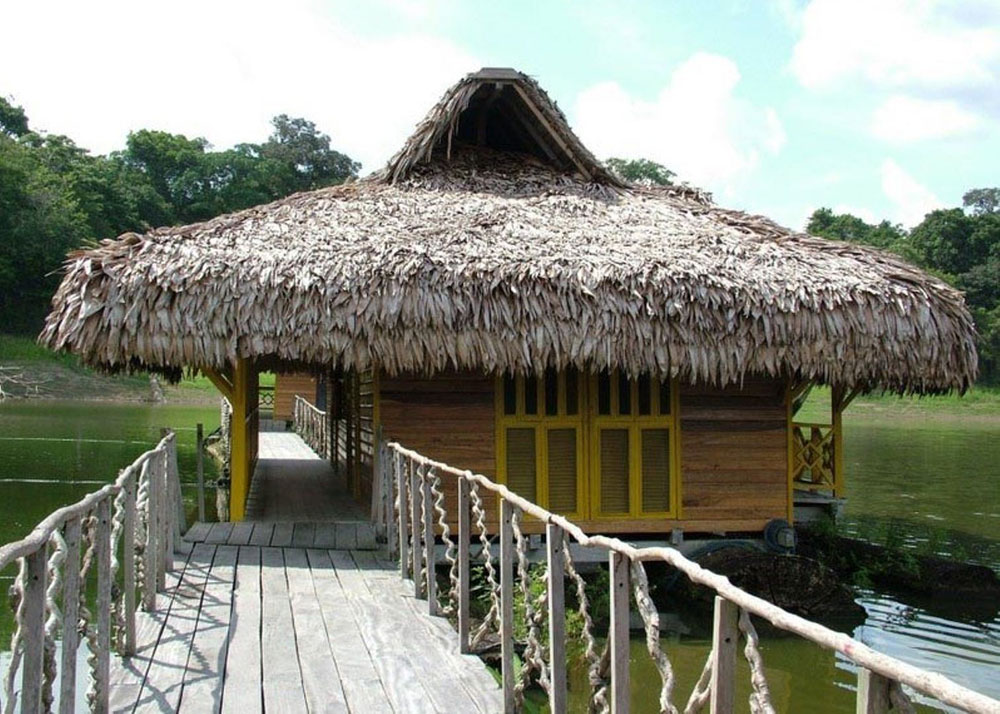